The cuisine served at Masala Library by Jiggs Kalra is a synthesis of over four decades of research and exploration across various Indian kitchens by Mr. Jiggs Kalra. The philosophy adapted in the menu at Masala Library by Jiggs Kalra revolves around progressive Indian cuisine, reflected through the diversity of traditional Indian fare, combined with progressive presentation, vibrant colours and captivating blend of flavours, with an emphasis on using the freshest of ingredients, carefully balanced spices and modern culinary techniques. The menu showcased is prepared from recipes originating from across the geographic landscape of the country, including some dishes inspired from the Streets of India, retaining their originality.

Masala Library by Jiggs Kalra is at the forefront of cutting edge cuisine in its endeavour to incorporate molecular gastronomy as an integral part of its menu. Molecular Gastronomy forms a part of our vision of presenting the future of Indian cuisine. While the focus is and will always be on the taste and authenticity first; keeping in tune with the vision and philosophy, some aspects of molecular gastronomy have been used to enhance the experience of the dish in terms of not just the flavour and visual appeal but also to introduce an element of surprise into the fray. Many mistake this concept to be rather synthetic, unhealthy and unnatural largely because it mostly relies on the techniques of fuming flasks of liquid nitrogen, led-blinking water baths, syringes, tabletop distilleries, and so on. The fact is that the "chemicals" and "processes" used in this concept are all of biological origin. Even while they have been purified and some processed, the origin of the raw materials used are usually marine, plant, animal or microbial. Additionally, these additives are used in miniscule quantities and have been approved by EU standards thus making them very safe for consumption.

The Nine course Degustation menu is a treat for connoisseurs of fine Indian cuisine. The Chef's tasting menu involves sampling small portions of all Signature Dishes in one sitting and can be accompanied alongside paired wine complementing each dish. 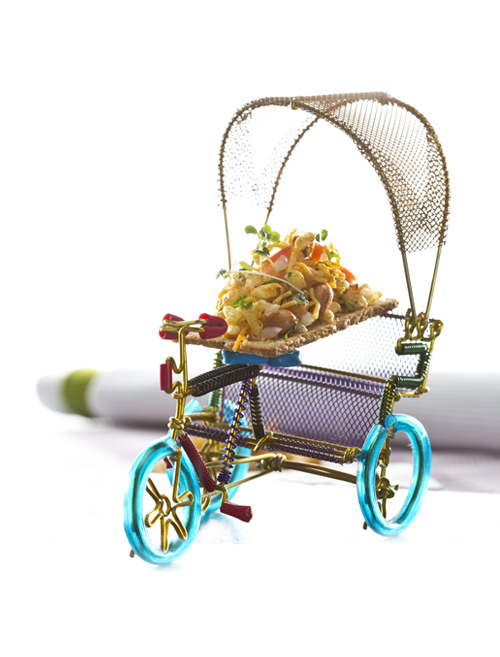